I stared up the rock bluff, an “in your face!” finale to the tough hike I’ve had. After two hours, Sandy and I were almost at the summit of the Prairie View Mountain Trail in Kananaskis Country, Alberta. My legs were raging, my chest was tight, and my sides were in stitches, but I had survived a continuous elevation gain of 600 meters, and I might as well give it a last push. After all, I did ask for this.

Growing up in the urban jungle of Manila, raw and isolated scenery were always coveted for me. I lived for outdoor adventures where all that surrounded me were trees and clouds and no humans as far as the eye can see. When we first arrived in Calgary and thought about what to do while we were there, I begged to go on hikes, knowing that their trails were legendary. I didn’t want to miss the opportunity while I was there. About 2 kilometers into it however, I started wondering if this was really for me or if I just glamorized “adventure”, and really didn’t know what I wanted.

It started off really chill though really windy at Barrier Lake (also known as Alkali Lake from X-Men United). I even wondered for a while if my layers were enough to keep me warm once we got higher up into the mountain. As we entered the trail, however, the trees blocked the wind and things became much more bearable. The breeze rustling through the leafless branches were soothing, the ground was still pretty flat, and I thought we were off to a great start. 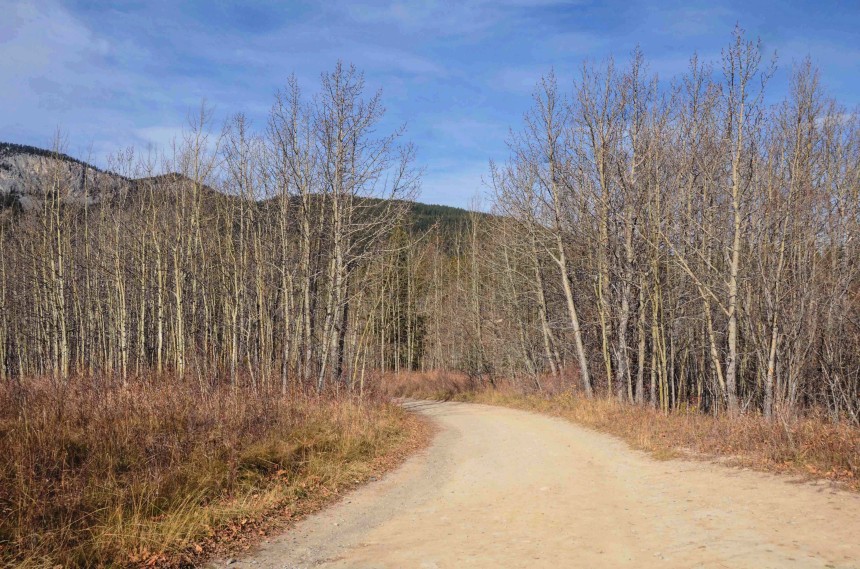 About fifteen minutes into the hike, we encountered the first steep uphill. And then it didn’t stop.  I probably asked for at least four breaks during the climb, desperately trying to catch my breath and steady my pounding head. The Prairie View Trail was listed as moderate in the guide map we checked, and understandably so. It was, after all, a very steady uphill walk (until the very end), but just a walk nonetheless. However, I found out later that many locals recommended hiking it with poles, because the relentless ascent could be pretty straining to the legs and knees. It made me feel vindicated, even if only to myself.

About halfway up, we encountered a couple of ladies and their dogs looking wiped but glowing. We greeted each other, as I found that every stranger did in Canada.

“Oh the view up there is so, so worth it!” one of them said, a huge smile on her face.

“Oh but that last bit is really tough,” her friend chimed in. “But the view is worth it!” she emphasized.

Well, I didn’t doubt that the view would be worth it. I just wished it would be here already. We bid them good day and went on our way. Sandy and I were able to chat for a bit at the beginning of the hike, but as we progressed and the geography became steeper, I grew more and more quiet. Eventually the conversation dwindled to me going “Water”, and him replying “Okay”.

True to form, just as I felt myself reaching the end of my rope, nature gave me a gift. We reached a clearing in the mountain, which offered a breathtaking preview of what awaited.

I immediately felt the fatigue drain from me as I ogled and photographed yet another gorgeous Canadian landscape. Barrier Lake from that high up, surrounded by the rocky mountains was a sight, indeed. Then Sandy pointed out to me where we came from. See that little rectangular patch jutting out in the northernmost part of the lake? Yeah, I had a 200 mm zoom.

From there, we were able to glimpse our destination. It seemed very close, and also very high. I braced myself.

The last few meters was a steep scramble on all fours, over large rocks. To be honest, I didn’t find it so bad if only because I was finally able to scramble, something I’d been wanting to do for about an hour – though the more appropriate word for that was probably “crawl”.

“Come on, more oomph!” Sandy exclaimed from behind me, teasing and encouraging at the same time. That had been his go-to word for the duration of my Canadian trip, an eloquent reminder of what it took to survive the outdoorsy BC way of life.

From chopping wood for bonfires, doing your own heavy lifting, to accomplishing tough hikes, oomph was a necessity. Unfortunately, my cushy city life molded me on the soft side, and there wasn’t a lot of “hardening the fuck up” to be done. While this was convenient for the most part, I kind of resented it, too. After all, I fancied myself a nature lover – nature in all her forms, which involved more than beaches and car camping. I needed oomph to do justice to the Wildling trapped inside the city girl’s body.

I clambered onto the peak, my heart beating like it was ready to burst from my chest. I gasped for lungfuls of air and looked around me. 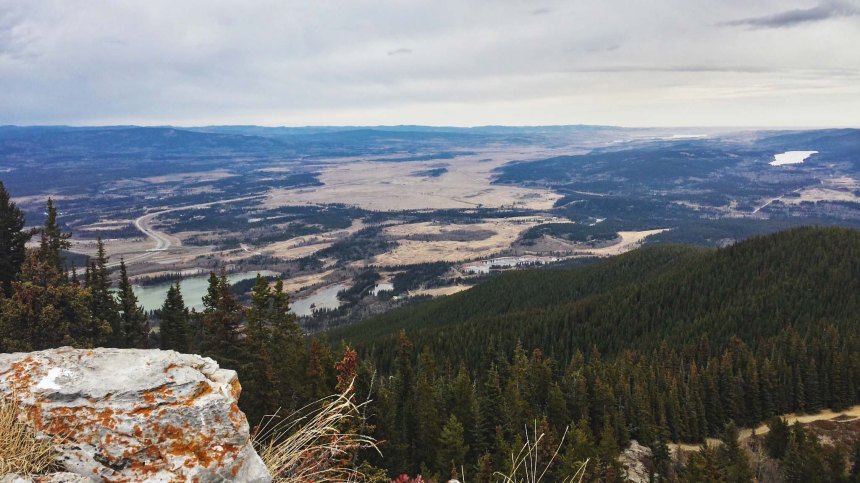 Was outdoor adventure really for me? The answer was a resounding yes. And experiences like these were the reason why. We had the view all to ourselves, lending an intimacy and privacy to such a majestic moment. I understood then how the ladies we encountered could look so bright, even after all that hard work. This was indeed worth it. I might not be cut-out to be a hardcore outdoors-man yet, but this erased any doubt in my mind if I wanted to be, if it was for me.

We chilled for a bit at the peak until the next group of hikers came along. There was another, higher, peak to check out –  the Fire Lookout – but we had a dinner date with some friends in two hours and I didn’t think I could keep going up then come back down in such a short span of time. I said my farewells to the prairies and valleys of Kananaskis Country, turned around, and started the climb back down. When I return some day, I know I’ll be so much better.

2 replies to Finding “Oomph” in Nature