The heat hit me like a brick wall the moment I exited the San Jose del Cabo Airport. I heard Mexico’s air was supposed to be dry, but the humidity was so thick it felt solid when I breathed. All too familiar, I thought. Like I was back home again. But as we drove from the airport and Cabo’s arid hills speckled with tall cacti rolled by, I realized just how new and unfamiliar all the imagery was.

The closest I had been to a desert before was during my visit to Myanmar in 2014, but even then the topography had been vastly different. Yangon and especially Bagan were covered in fine dust and reddish sand. It left a faint haze in the air every time the wind blew. This time, however, everything just looked… dead. There was no movement in the tufts of brown grass or the visible patches of cracked soil. The giant cacti stood stiff, looking dense and formidable. I was captivated.

When we arrived in our hotel in Cabo San Lucas, the reality that I was in Mexico truly sunk in. Our cute little hotel was “cheap and cheerful” as Sandy called it. Cabo Inn had the colors, details, and atmosphere I always associated with Mexico. It was so bright, fun, and lively. It was painted with fiesta colors, and it was the perfect way to get into the country’s vibe. 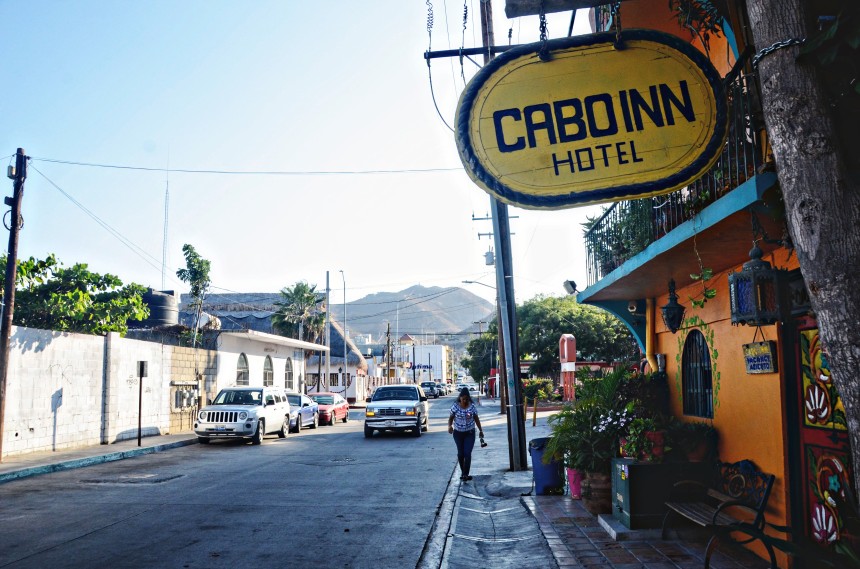 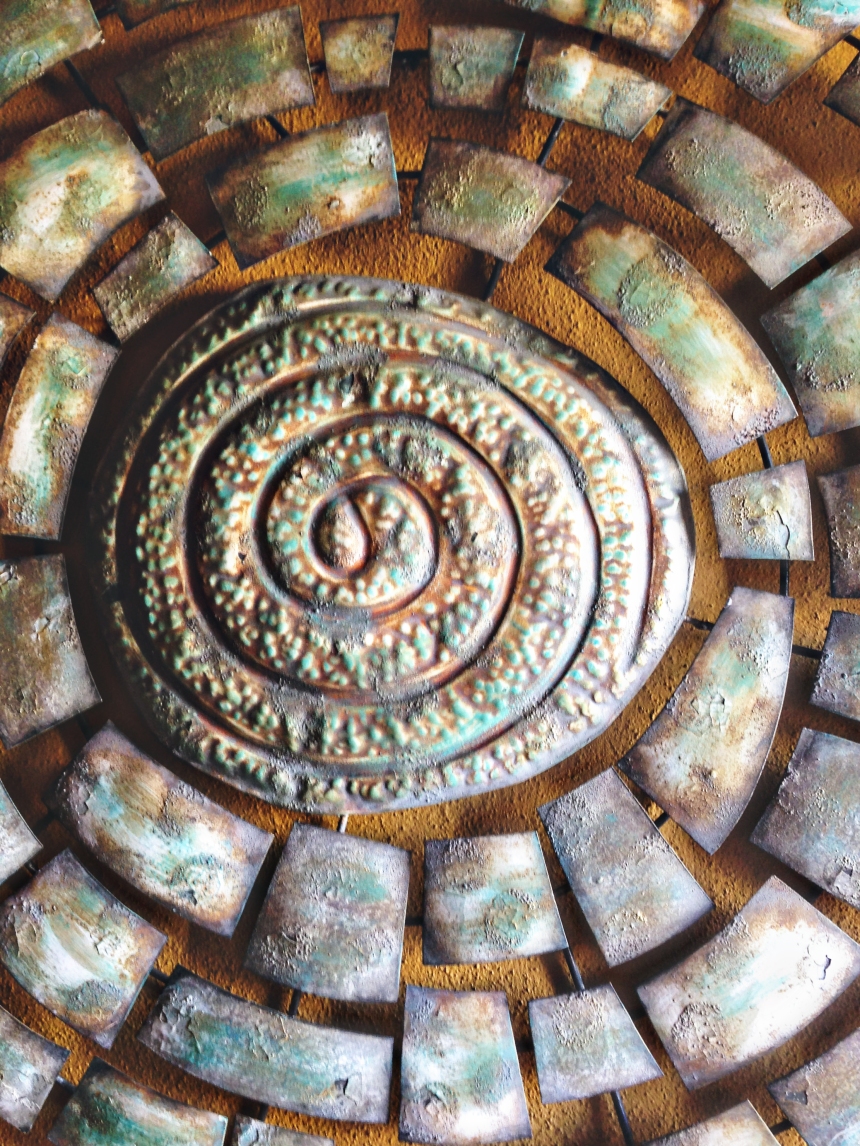 One delicious lunch at Mariscos Mazatlan (my first experience of real Mexican food, where I learned my life was a lie!), one awesome catch-up dinner with Sandy’s friends from the Nautilus, and one hard Cabo night’s slumber later, we packed our bags and headed out.

Before joining his boat for a week of diving, Sandy gave me a crash course on Baja California Sur. The plan was to drive to La Paz to visit another former colleague who now owns a beach-side B&B, check out the quaintness of Todos Santos, and chill at Playa Los Cerritos for a bit, before heading back to San Jose. We had 5 five days, and we successfully filled it to the brim. 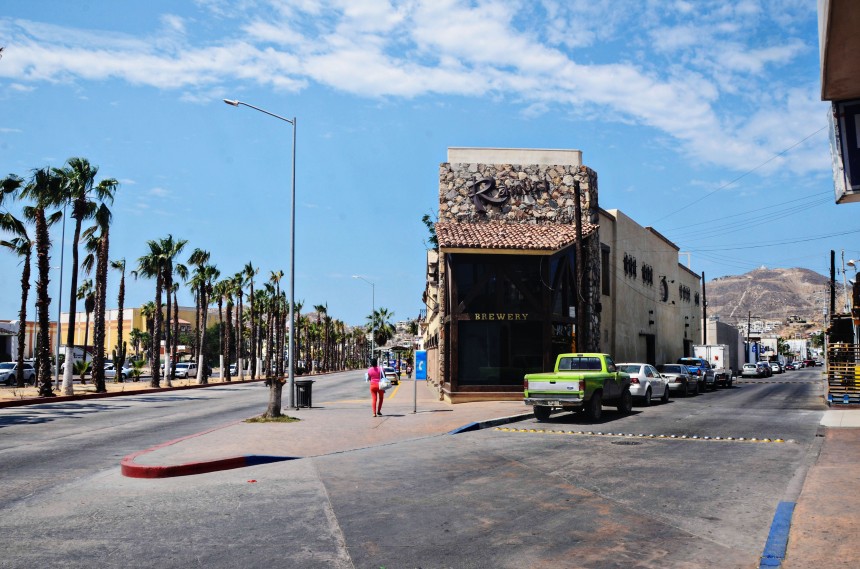 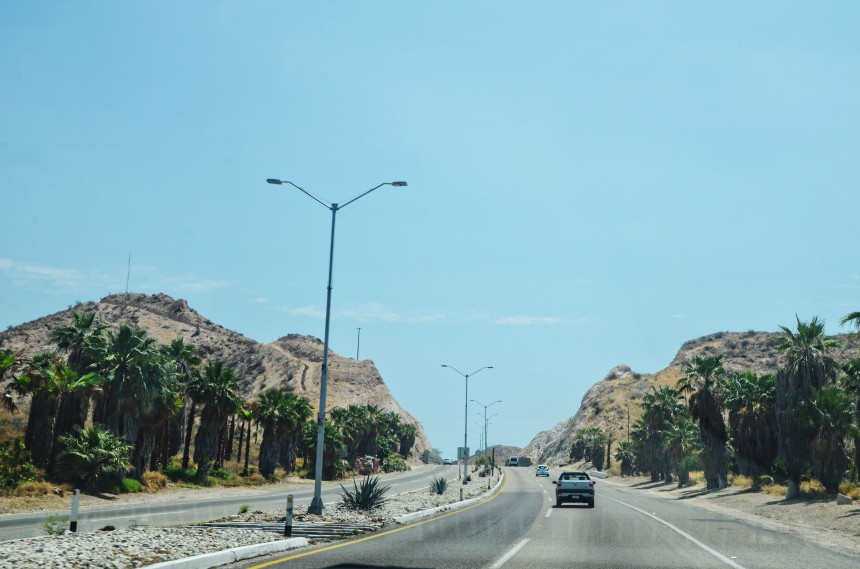 We rented a car from Cabo. The company, whose name I don’t remember, has a decent network all over BCS, which meant that we could return the car at a different branch. With that settled, I bid see you later to Cabo and went on our merry way.

Our first stop was the heritage town of San Jose. I reveled at the brightly painted buildings. I loved how their old architecture was maintained, but enlivened by the colors. There was something refreshing about it. I guess with a landscape that’s constantly brown and dry, one way to incorporate a semblance of life into things is by making them look as vibrant as possible.

I was also fascinated that, despite both being Spanish colonies, architectural influence in Mexico and the Philippines still looked very different. Obviously they took into account the climate and the surroundings. Where Mexico had low, sturdy stone structures with a seemingly-restricted number of windows – probably to protect from the unrelenting sun, the Philippines had expansive wood and adobe buildings with wide-open windows to let in the tropical breeze. 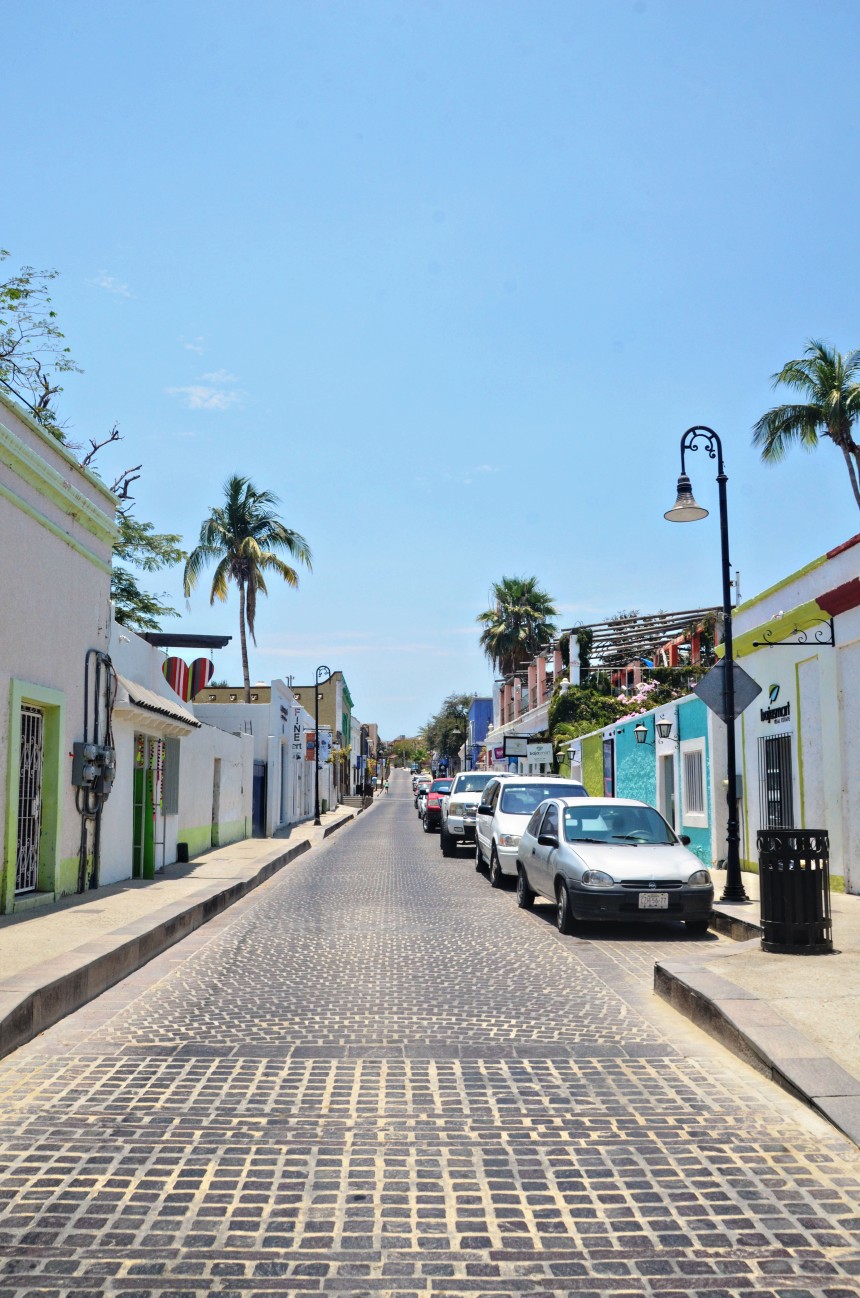 That said there were still plenty of similarities, which I also enjoyed. It’s always nice for me to find connections outside my bubble. It makes me feel like I’m part of something bigger. These, for instance, look like they’re straight out of Intramuros, the walled city in Manila. Or Vigan, in its glory days. And of course, there’s the ever-present church in the plaza.

I was surprised to see though that it was much simpler than the old churches and cathedrals we had in the Philippines. There were no ornate golden retablos boring down from the altar and opulent frescoes in the ceilings. But otherwise, it felt so familiar, down to the Stations of the Cross and the electric fans on every wall post.

By early afternoon we were well on our way to La Paz. I got more of Mexico’s strange landscape. I loved how valleys dipped into wide flat lands, then just as quickly rose into sprawling hills again. Always covered in dry tufts, weeds, and tens of different kinds of cacti. Sandy made a note how, coming from the lush evergreens of British Columbia, Canada, it was sometimes hard to believe that all this vegetation wasn’t actually dead. I felt the same. And yet, I couldn’t tear my eyes from these new scenes that I’ve never seen outside TV and movies. I found it beautiful, in a harsh, raw, almost defiant kind of way. 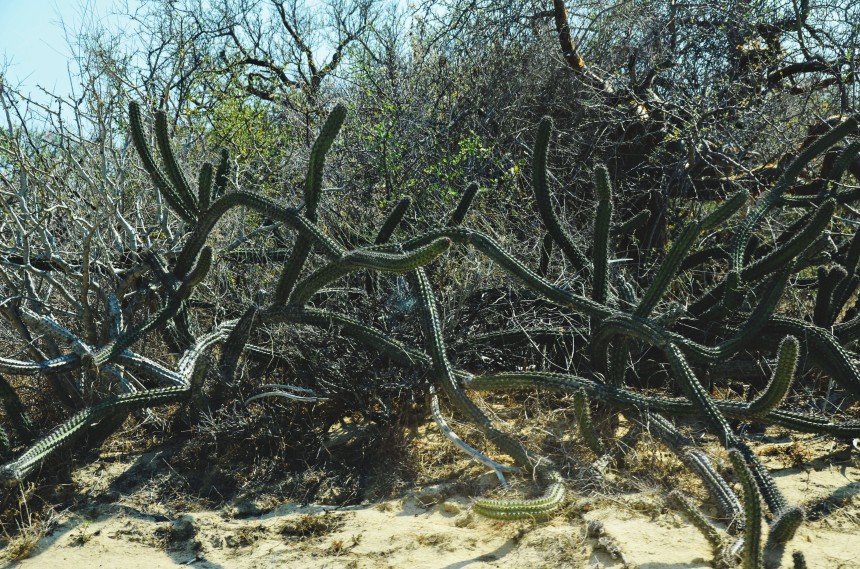 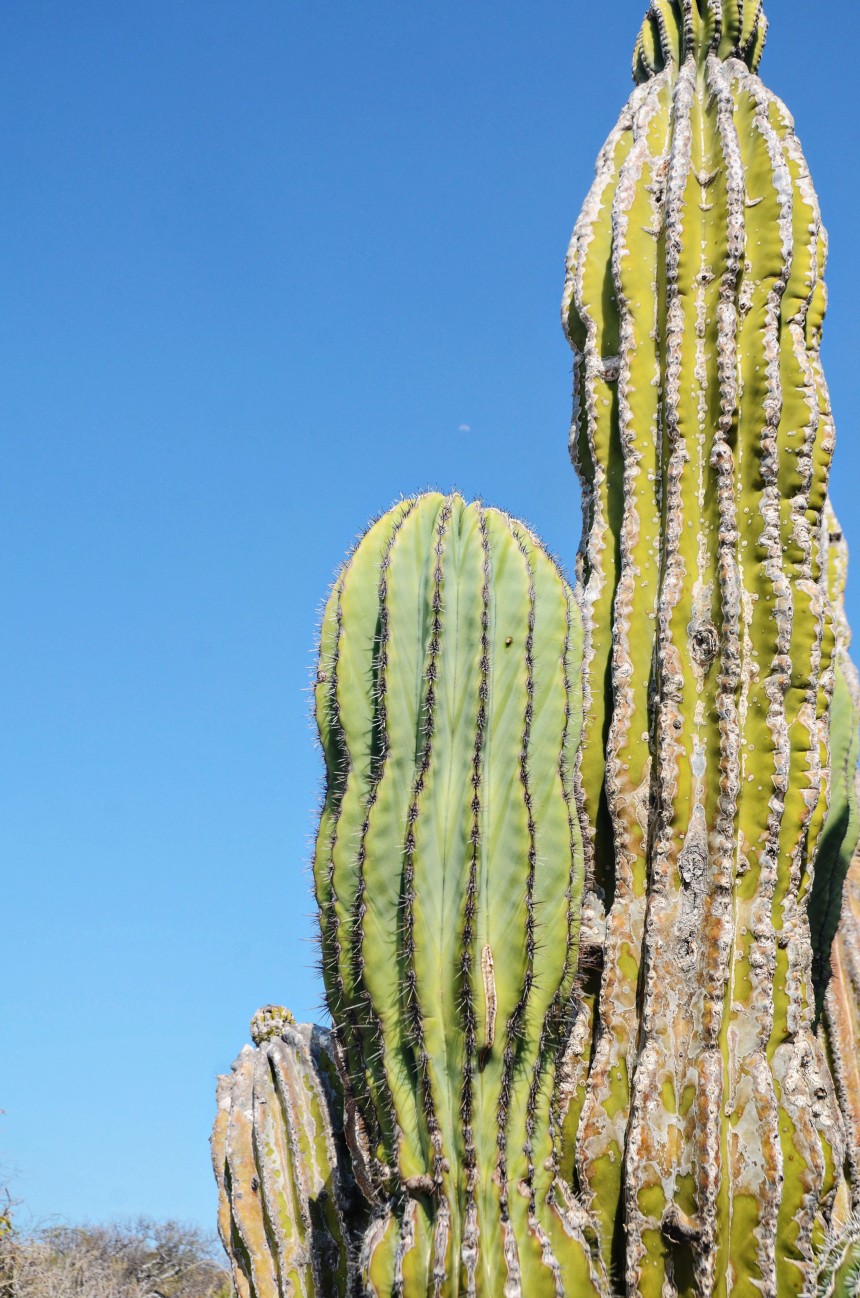 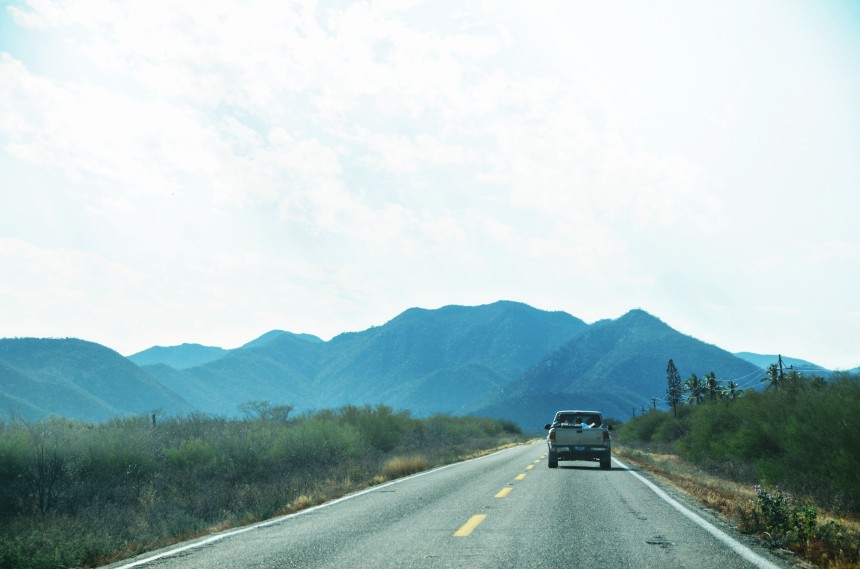 We finally arrived in Casa Kootenay Bed and Breakfast just in time for golden hour. It’s owned and operated by Sandy’s old friend from the Nautilus, Leeanne. It was a gorgeous beach-side property, originally a house converted into a cozy inn. Nothing says Mexican vacation better than this view, really.

Because it was off-season, we had the place to ourselves. Leeanne hung out with us the whole night, and even took us to one of her favorite street taquerias and chilled with us at the malecón. It was so great because it was essentially visiting an old friend who also happens to have this lovely property and knows everything about everything.

The next day, we went on an island hopping tour in the Sea of Cortes to snorkel with sea lions in Isla Espiritu Santo. It was EPIC, to say the least. Dolphins and a humpback whale also made appearances that day. But that’s all for another post, because there’s too much to say about it.

By the following morning it was time to go again. This time to the small town of Todos Santos. Unlike San Jose, Cabo, and La Paz, Todos Santos had a distinct small town vibe despite being a major tourist spot in the region. Perhaps it was the emptiness of the streets compared to La Paz that gave off this feeling. Or the very old-timey ambiance, similar to all those period Zorro movies with Antonio Banderas I saw as a child.

We had no hotel reservations when we got there so we spent a good hour or so driving around following leads on Agoda. We ended up in Hotel Casa Tota with its charming brick and concrete facade, modern interiors, and killer roof decks. The off-season price was pretty nifty too!

Of the four towns we visited I think Todos Santos was my favorite, because it felt so cozy and intimate – or at least it was that time. I would definitely love to go back here and explore the streets and countless shops some more, maybe even visit the beach, see what’s there to be discovered.

It’s also famous for one of the more popular Hotel California’s around. Like dozens of others, this establishment claims to have been the inspiration behind the Eagles classic, even if some say the song wasn’t even really about a hotel. Either way, it was cute.

After a quiet night and some souvenir shopping that morning, we were back on our way for the last time. We were headed back to San Jose del Cabo that night, ready to join Sandy’s boat the next day. But before we hung our hats for this all-too-short Mexican roadtrip, we stopped by Playa Los Cerritos for some good sunbathing. I was itching to get into the water again, but the waves were too strong. It was a surfing beach after all. I contented myself with a nap on the fine sand and thanked Baja California Sur for the wonderful introduction. 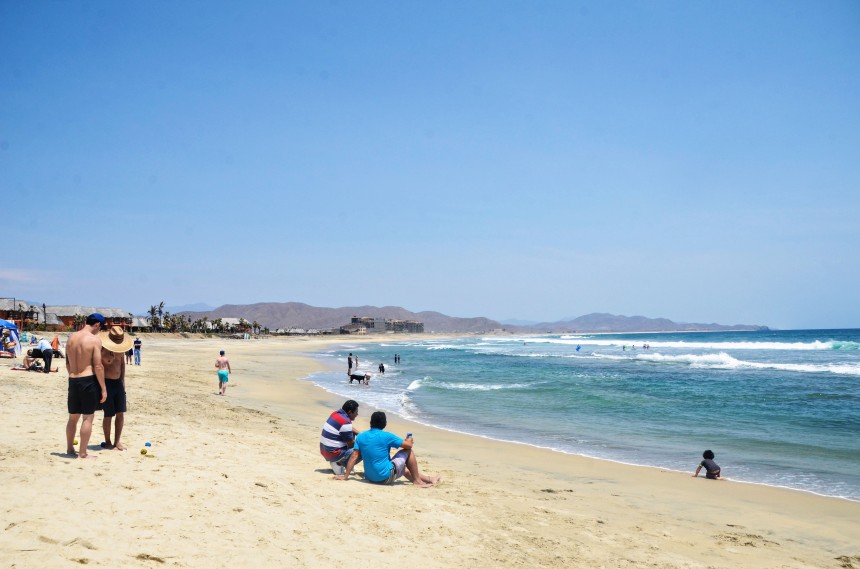 Once again, I can’t wait to be back.