Similar to the Pililla Wind Farm in Rizal, the Bangui windmills in Pagudpud, Ilocos Norte towered in rows and rows along the ridges of the hills and beaches. They went on for kilometers, appearing at every turn, dip, and rise on the road. There were dozens of them – certainly more than the windmills in Rizal – standing like sentinels against the sea.

The original windmills were the twenty right on Bangui Bay, which were commissioned in 2005. Since then, however, more towers have been built in order to harness the constant strong winds that passed through the shores. I didn’t count the total number of turbines we passed, but suffice it to say they were everywhere in Pagudpud. 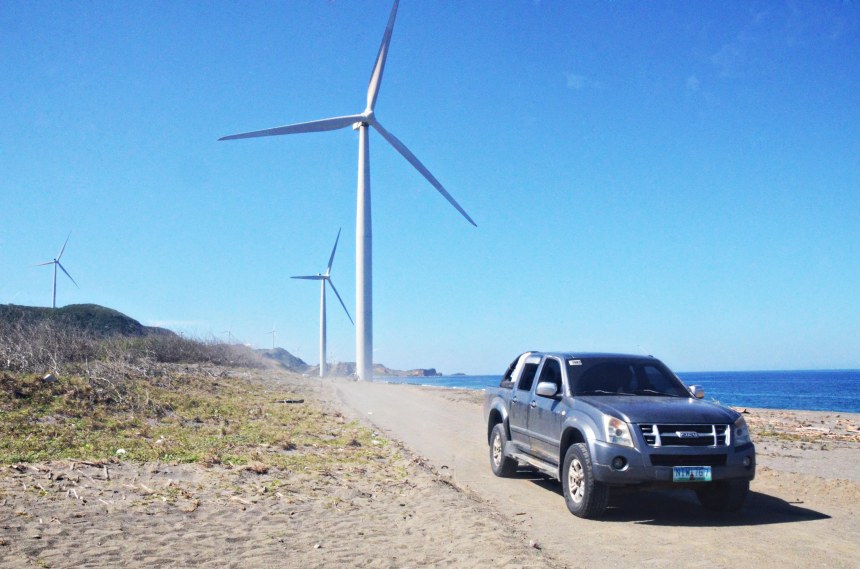 The ones right on the beach were the most fascinating for me because they created such a unique feature on an otherwise ordinary landscape. I also noted how the windmills on the beach were shorter in body than the ones on the soil. Perhaps it was because sand was less stable and so they had to be planted deeper? Of course, that didn’t make them any less imposing. 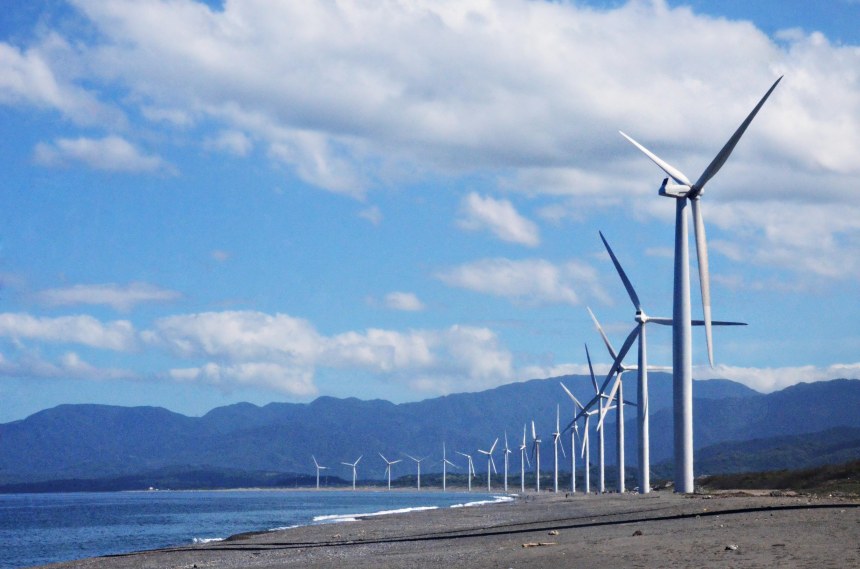 We had an amazing beach-side lunch in Bangui, then went back on the road. We passed one of the most scenic drives in Luzon at the Patapat Viaduct. The road right where the mountain met the sea reminded me of the Sea to Sky Highway in Vancouver, albeit a much shorter version.

The rest of the scenery shifted from rice fields to lush jungles to mountain faces. It was nowhere near arid, as I had wrongly expected the north to be. As a matter of fact, it was pretty lush. 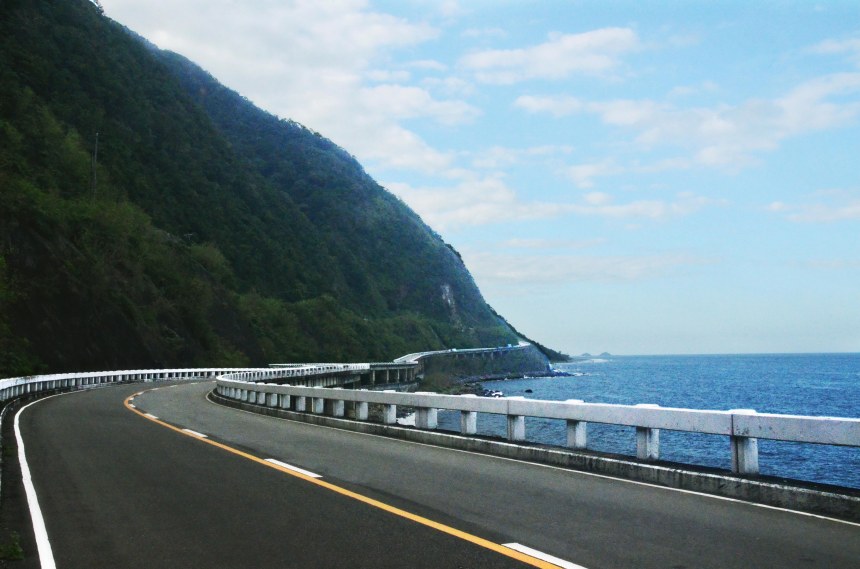 Our final destination that day was Saud Beach, where we planned to spend the night. Actually getting there, however, wasn’t so straightforward. We didn’t have hotel reservations because we wanted to see the options before we booked. It was good and bad in the end because while we wasted a lot of time searching for the right place, we did find the perfect place in the end.

The search involved beach-side karaoke machines that sent us running, tacky concrete statues of random characters (Clash of Clans? Marvel superheroes? Barack Obama?!) scattered across the beach, a seaside ghetto, and a nightmare PHP7000/night ($140 US) hotel room filled with cheap plastic cabinets and cheap synthetic sheets. No thank you.

It was already getting dark when we found Saud Beach Resort, the answer to our prayers. It was pretty much an ideal beach-side escape, with palm trees lining the sandy paths. The spacious rooms were in large cottages that had a native motif. They ran out of menu items, but we were still satiated in the end. The most important part, the beach, was as it should be: untouched, uncluttered, empty. (I’m looking at you, Hannah’s Beach Resort.)

The following morning, we headed back to Laoag. Along the way were some more of Ilocos Norte’s iconic spots – and others that should be.

The Kapurpurawan Rock Formation was very interesting. The white, limestone saddle that sat on top of the rock was the focal point of the place. But I also liked the variety in terrain around the area. You had the limestone rolling around natural pools filled with ocean water, and in between the rocky crags or over the waters were moss or grass. In between the cliffs was even flatland where horses were grazing.

The landscape reminded me of Biri, Samar, only greener and more lush. It was certainly unique in Luzon, and I enjoyed seeing it in between the white sand beaches and heritage spots in Ilocos Norte.

Our next stop was the Cabo Bojeador Lighthouse in Burgos. This was located in between Kapurpurawan and Laoag. I didn’t see it much on travel blogs documenting Ilocos Norte, which I found surprising because I particularly enjoyed this spot.

The lighthouse was built on the northwestern-most tip of Luzon Island in 1892, and has continuously operated since. The whole structure was still in its original form, with all of its original fittings. Only the roofing and the light mechanism were replaced not too long ago because of earthquake damage.

Being a lover of history and heritage structures, I really enjoyed walking around the main building and taking photos. The view from the base of the tower was pretty breathtaking as well. I could already imagine the Spanish galleons coasting over the cape, looking inland and seeing the light beam, knowing that they have definitively entered Philippine waters. 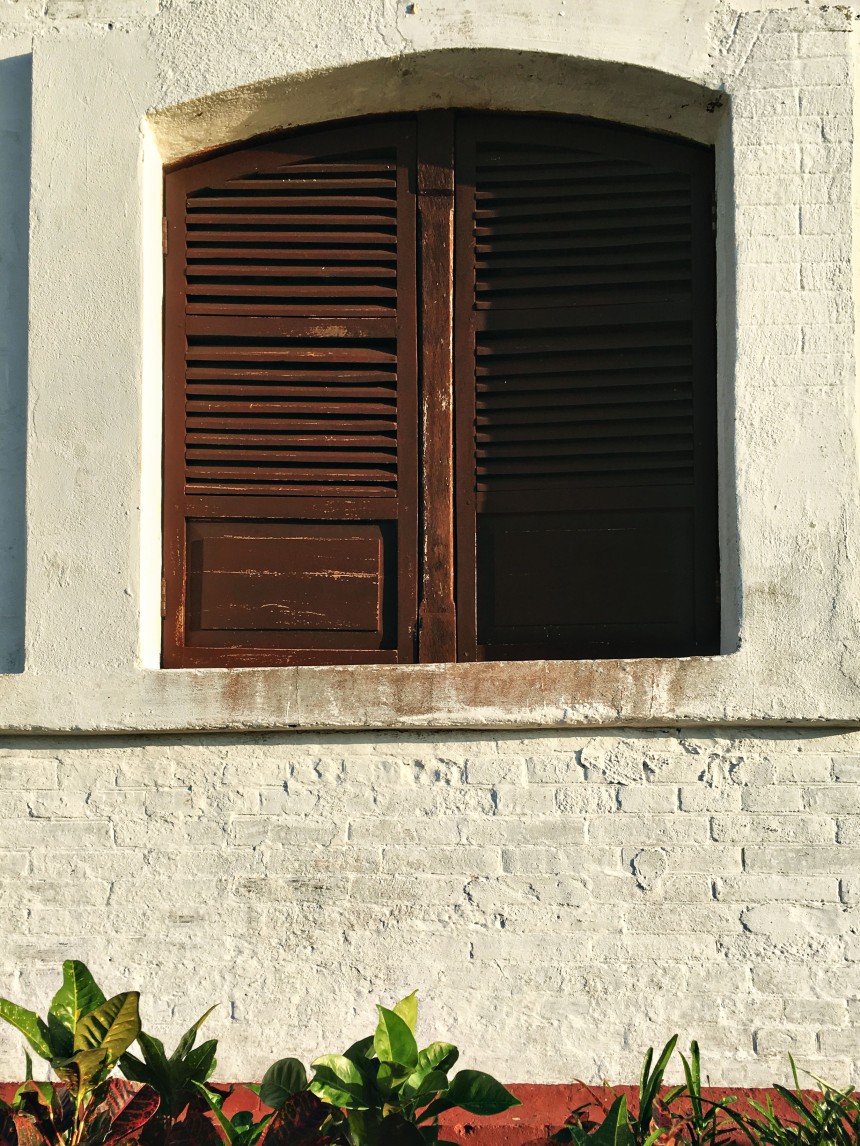 Our last day was a bit of whirlwind, making a quick stop in Sarrat, another town in Ilocos Norte, before driving about two hours to Vigan, Ilocos Sur, and then driving back to Laoag to check-out and head back to Manila.

Most of it was spent in our van, but what portions were spent walking was time well spent. We started early and visited the Santa Monica Parish. I’m an ardent lover of red brick buildings, so seeing the church and its monastery elicited a lot of clicks on my camera.

The church was constructed in 1724, but the whole complex, including the monastery and belfry weren’t completed until 1779. It’s considered the biggest church in the province, and arguably the largest and deepest nave in the region.

It was very early when we arrived so the church itself was still closed. I was able to go inside to take some photos, but they came out a little dark. From inside I followed a half-open door which led to the convent’s backyard. Except for the capiz windows and the ventanillas covered with wood scrollwork, the building looked like it was right out of Europe. I loved the texture and the age of the building. Truth be told I wish I could have peeked inside too. 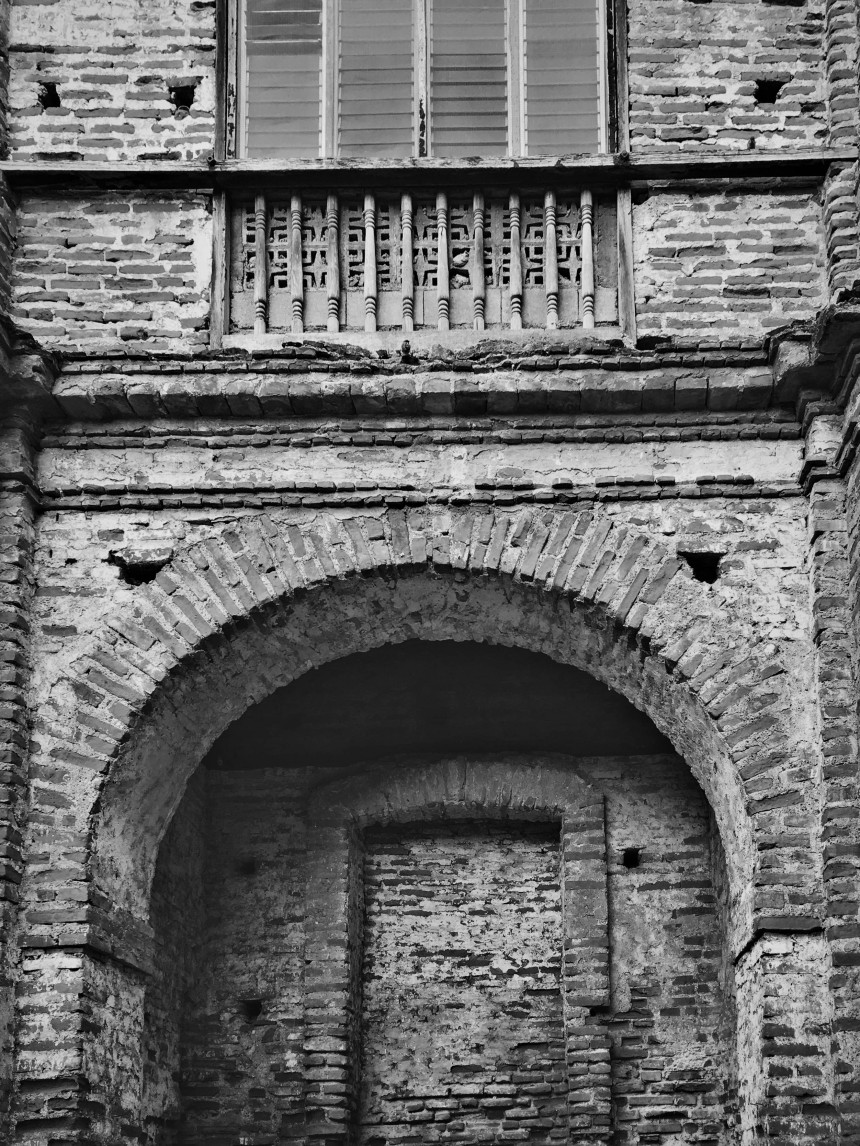 I explored a little more and found myself in a courtyard. There was no one else there and it was completely quiet. It had the perfect atmosphere to put you into a spiritual frame of mind. Not to mention, it was really pretty. 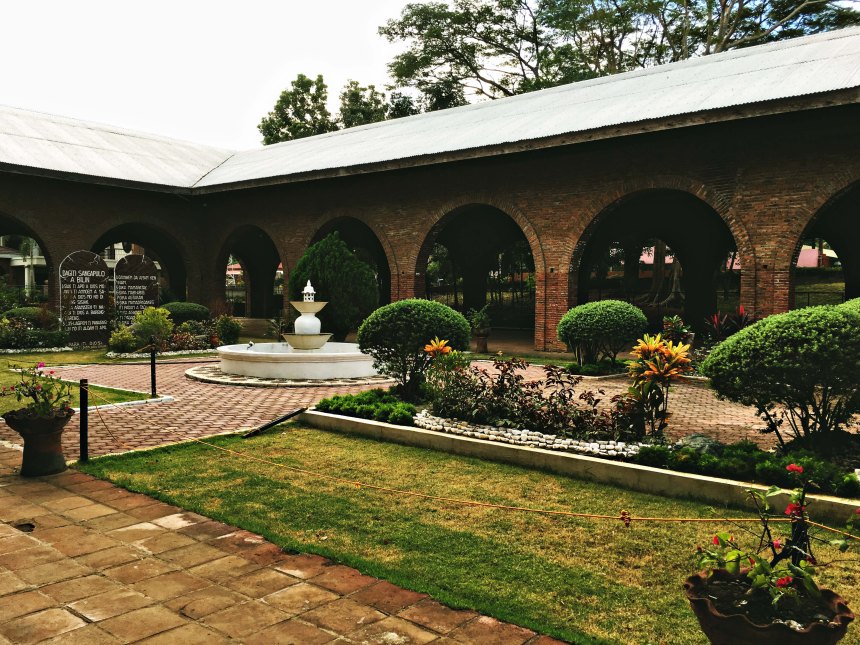 Despite the early start, we didn’t make it to Vigan, Ilocos Sur until almost noon. Vigan is the capital city of Ilocos Sur. It was discovered by the Spanish in the 1500’s, though it had been very active in trade with the Chinese long before that. It’s now a UNESCO World Heritage Site, being one of the last few cities in the Philippines that preserved our colonial history.

I had been here once before, seven years ago, on one of my first trips as a wanderer. While Vigan hasn’t changed, it’s also not the same place I had visited anymore.

The burnayan, the small warehouse where they made Vigan’s famous burnay or clay jars, was no longer a quiet, nondescript establishment at the corner of a residential street. It was now a full-on tourist spot, with stalls lined up outside selling random Vigan souvenirs. The narrow streets were now cramped with more cars and tricycles, and the old kalesas, horse-drawn carriages that were more a staple on the road, had become a little less rare.

Despite the traffic leading to the plaza mayor, it was good to see Calle Crisologo still closed to vehicles. Calle Crisologo was Vigan’s most iconic street, where the best preserved Spanish colonial houses stood. Most of them have now been converted into shops, restaurants, inns, and even a funeral home. 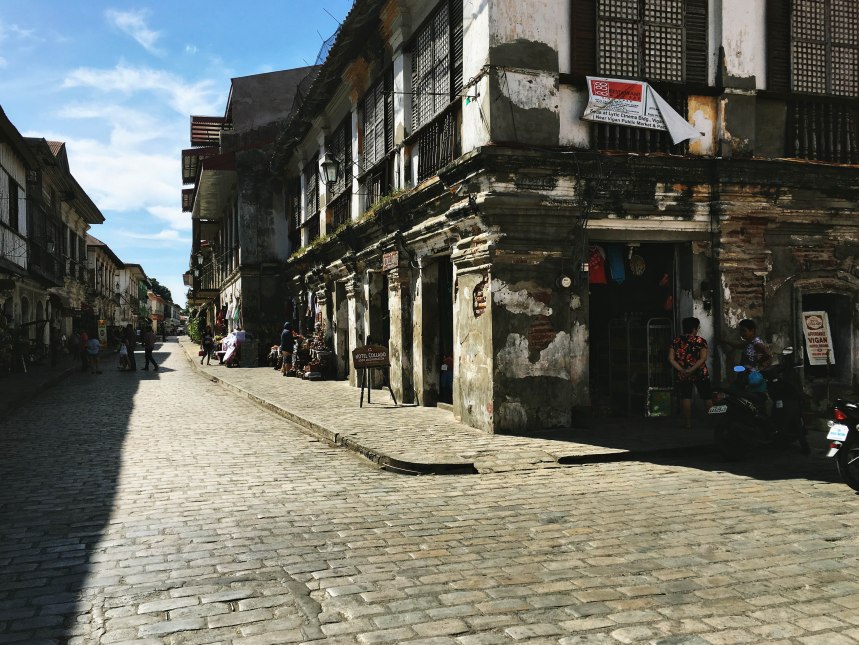 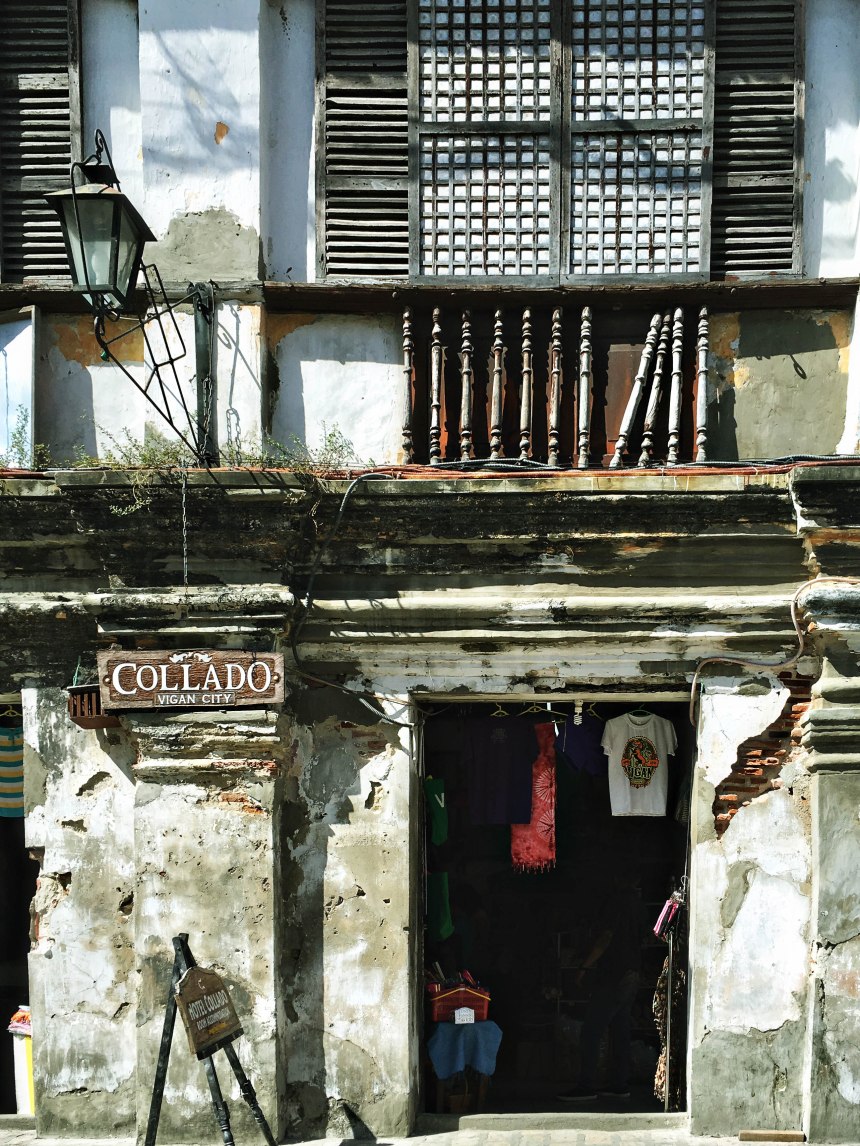 After a hearty lunch, we headed back to Laoag to catch our trip home. The action-packed four days had come to a close. It was a pretty great trip, finally allowing me to get a glimpse of a province I had been fascinated with for a long time. Afterward I certainly thought of Ilocos as something more than “arid flatland and Marcos country“. Instead, it was a culturally and geographically rich province that had so many hidden gems.